The Skinny:  So yesterday (12/1/11) I went to Echo Park to go watch Jamie Woon perform at The Echo.  Initially I was going to go there by myself, but I ended up with two guests who wanted to go eat dinner.  We ended up eating at Xoia Vietnamese Eats.  It would be my second time. (1st time here.)

I ordered the Mi Quang which is a “Hoi An specialty! Wide yellow rice noodles served w/ seasoned shrimp and pork, lettuce, bean sprouts, sprinkles of crushed peanuts, banana blossom, fresh mints, sesame crackers in a shrimp/pork broth.”  I also got some Spring Rolls with Beef and Shrimp in it.

The Good:   I never had Spring Rolls with Srhimp and Beef before, so that was something different.  It reminded me of Bulgogi (Korean marinated beef), especially with some Soybean leaves mixed into the other greens and bean sprouts.

The Mi Quang was a little sweet, sour, fishy, crunchy, and kind of healthy tasting, if there is such a thing.  The waitress mentioned that the broth in it would have a concentrated flavor of Shrimp and Pork, but I think it was a bit too subtle for my taste buds.

The Bad:  The Mi Quang left me with wanting more and it made me regret not ordering the Pho.

Would you come back again?  Yup!  Even though Xoia kind of has a fusion theme going, their dishes seem legit in it’s Vietnamese authenticity.  So I still need to try their Pho and the Bahn Mi on their secret menu that has an runny egg on top.  Also, one of the waitresses was really…..realllllly……cute, and what she wore that night….wow.  😡

Music Related: At Echo with Kitten + The Postelles

“Kitten with a Whip” via: alycamus

The Skinny:  On June 28th, I finally got to see Kitten the band at Echo along side with The Postelles, Pageants, and Pan Am.  I arrived 2 acts late with a group of friends but we got there just in time for Kitten, The Postelles, and some beer.

The Good:  Kitten’s Chloe Chaidez and it’s pride of instrumental beasts, were everything I thought they were going to be.  They rocked out like overachieving child prodigies  infused with some Rage Against the Machines, making people over 30 feel even older with their long bursts of energy.  Their music was melodic when it needed be and controlled chaotic when it was time to let their youth shine through.   It was just a fun experience and I couldn’t help but smile like as if I was watching a bunch of kids achieve something people twice their age could never.  They are a talented and hungry group and the more crazy they acted on stage, with their hair twirling about and their sibling love punches towards each other’s backs, the more engaging the show got.  They also sound completely different from their recordings.  Their live sets, like “Chinatown” and “Kitten with a Whip” had more raw energy, as it should, and I loved it.   I’ll be looking forward to seeing Chloe Chaidez rise to fame and into hearts of young aspiring musicians younger than her.

The Postelle were solid too, and if weren’t for a few helpful loud female fans in the way front, I think their time spent at Echo would have been a dud.   Their music was melodic and for some reason it reminded me of when Michael J Fox played at his mother’s prom in “Back to the Future.”  I thought they had that classic 60’s rock sound at times and I read somewhere that they were like The Kooks and The Strokes.  Since I’m unfamiliar with those bands at the moment, all I can say is that I just liked how their music sounded.   It’s just too bad their vocals got drowned out by the bad levels in the speakers.  And on a side note, one of their band members looked like Jim Halpert from The Office.  It was kind of humorous….if you’re into the whole “who looks like who in the world of television sitcoms.”

The Somewhat Bad:  While watching Kitten play their set, one of Chloe’s friend, who was drunk off his rockers, got on stage with her and had a nice personal moment.  After that, he got back to the floor and started slamming into the female section of the crowd like as if it was a mosh pit.   I shouldn’t judge…much, but that was pretty weak and I think he even dropped his butterfly knife in the process.

“Hey Chloe’s buddy, if by some small random chance you read this….if the knife is yours and you want it back, the bartender at Echo has it.”

And the only somewhat bad thing I have to say about the Postelles is that, since I was standing in the center and near the stage, lead singer Daniel Balk; who comes across looking like Screech and the Artist formally known as Prince, kept on indirectly looking towards my direction, lifting up his shirt and exposing his man boobs.  It was pretty uncomfortable, so I had to hide behind one of my friends so she could endure the blunt of that awkward glare.

The Bad:  While Echo usually has great opportunities, at cheap prices, to see up and coming music acts, the place suffers from painful levels in the sound system that range from blood piercing high pitches to drowning out lead vocalists.  Either their equipments are just old and decayed, the venue is too small, or their sound engineers just aren’t that good when there are too many instrumental elements or band members to take care of.

Would you come back again? Despite the sound system, Echo is still a great place to find good live acts, street tacos, and easy parking…so yes.

So after failing to see The Naked and Famous the night before, I Saw them on April 9th and had front stage view.  I was actually worried that they wouldn’t be very good live, but they turned out to be just great. 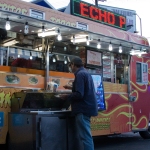 The Skinny:  On April 8, 2011, I was suppose to go on a food crawl with some TMF247 people and end the night watching The Naked and Famous perform live at the Echoplex in Echo Park.  However, one by one, people started to drop out and so I ended up going there by myself.

While I was at Echo Park waiting for the show, I hit up El Flamin Taco Truck and Xoia Vietnamese Eats since they were close by.   I usually drive by the El Flamin Taco Truck  when I’m on Alvarado Street and on the way towards the Dodgers Stadium.  It would be my first time eating there that day.  Xoia is a fusion style restaurant that serves up Pho and Vietnamese influenced Street Tacos.

The Good:  The truck that wears “El Flamin” decals proudly all over it’s body, was quite impressive.  It had television sets playing Napoleon Dynamite, a LED lit sign greeting costumers in different languages, a rotating spitfire for their Al Pastor, and a full open salsa bar.  They obviously must be doing something right to have their colorful truck to be pimped out like that.

While I was at El Flamin Taco Truck, I ordered the Buche and Al Pastor tacos, 2 of each.  From the Salsa bar, I added the red sauce and some of the Cilantro Onion mix on all of them.  I definitely liked the Buche because it was clean tasting, had a nice texture, and was flavorful.  The red salsa was nice, but for me  it didn’t really add much to the tacos themselves.   Their hand made fresh tortillas were a first for me, but unfortunately I couldn’t really taste the difference.

The Bad:  First off, I’m just not a fan of Al Pastor at the moment.  I just don’t get it or at least I haven’t had some where I understand that “that is what Al Pastor is supposed to taste like!”  Not too long ago, I had some that tasted like Chinese style BBQ Pork, and I liked it.  The first Al Pastor Taco I had at El Flamin was kind of bland, crunchy from a piece of gristle, and greasy.  It reminded me of  Korean Pork Bulgogi that is void of sugar.  However, for some reason the second serving of the Al Pastor had better pieces of meat and it tasted much better than the first.  The grease became greasy in a good way and the marinated pork was tastier.   Weird.

At Xoia Eats, the Chicharones Tacos was disappointing because I was expecting pieces of Crispy Pork in it.  Instead, the Pork seemed to be regular cuts of meat fried up in a pan.  If there was Vietnamese style seasoning on the meat, I didn’t notice it.   The tortilla the Chicharones came bedded on had the texture of thinly sliced re-hydrated stale corn chips and I just wasn’t a fan of it.

The Fail:  So after killing 2 hours of time in Echo Park and waiting in line for 2 more hours for the Naked and Famous show, it turns out my ticket was for the following night.  I did see them the next day, and they didn’t disappoint as a live band.

Would you come back? Yes on both accounts.  I’m sure the taco meats and other items at both locations are worth exploring, especially since I’ll be coming back to The Echo/Echoplex for other shows.